Crypto caught a bid over the last few days and Bitcoin has been on a wild ride launching 38% off it’s recent July 20th lows up to $40k before being stopped in its tracks a couple hours ago and sharply pulling back to $37k where it sits right now. False reports that Amazon would begin accepting BTC fueled the rally while there was lots of talk on twitter about supply shock and short squeezes. As Brian discussed in the Daily Brief today, Bitcoin simply ran out of sellers down in the $30k area. The Bears had clearance to dump it but couldn’t take control and ultimately the Bulls stepped up and away it went.

It was definitely refreshing to see such a strong and quick rally after several months of grinding away doing nothing. However, it did run into significant resistance up at the top of the current range and hasn’t been able to get above $40k just yet. Now that we’ve had our initial burst, I’ll be watching this pullback and how it consolidates to see if the bulls can keep driving the bus upwards.

The last time I wrote about Bitcoin was on July 12th and it was looking a bit heavier back then. I walked everyone through an example of our BoT setup with a short entry of $33,700 and a bearish target of $24,235, with my stop at $36,700. Price did make its way lower down to $29k and our BoT stop management rules have a very specific level that dictates when we move our stop to scratch. In this case that was on the breach of $30,470, so once price began moving higher I was forced to exit the trade at scratch. Fortunately I was able to walk away from this trade without losing any money and I think it’s a great example of how following a trade setup and minding your stops will keep you out of trouble. Had I not walked away at scratch, this trade that was going well for me would’ve quickly turned into a loser. And even worse, many traders might not have exited at their original stop either and the trade would’ve gotten even worse for them. By following pre-planned rules as well as entries and exits you take the emotional part out of your decision making and let the setup do the heavy lifting for you. 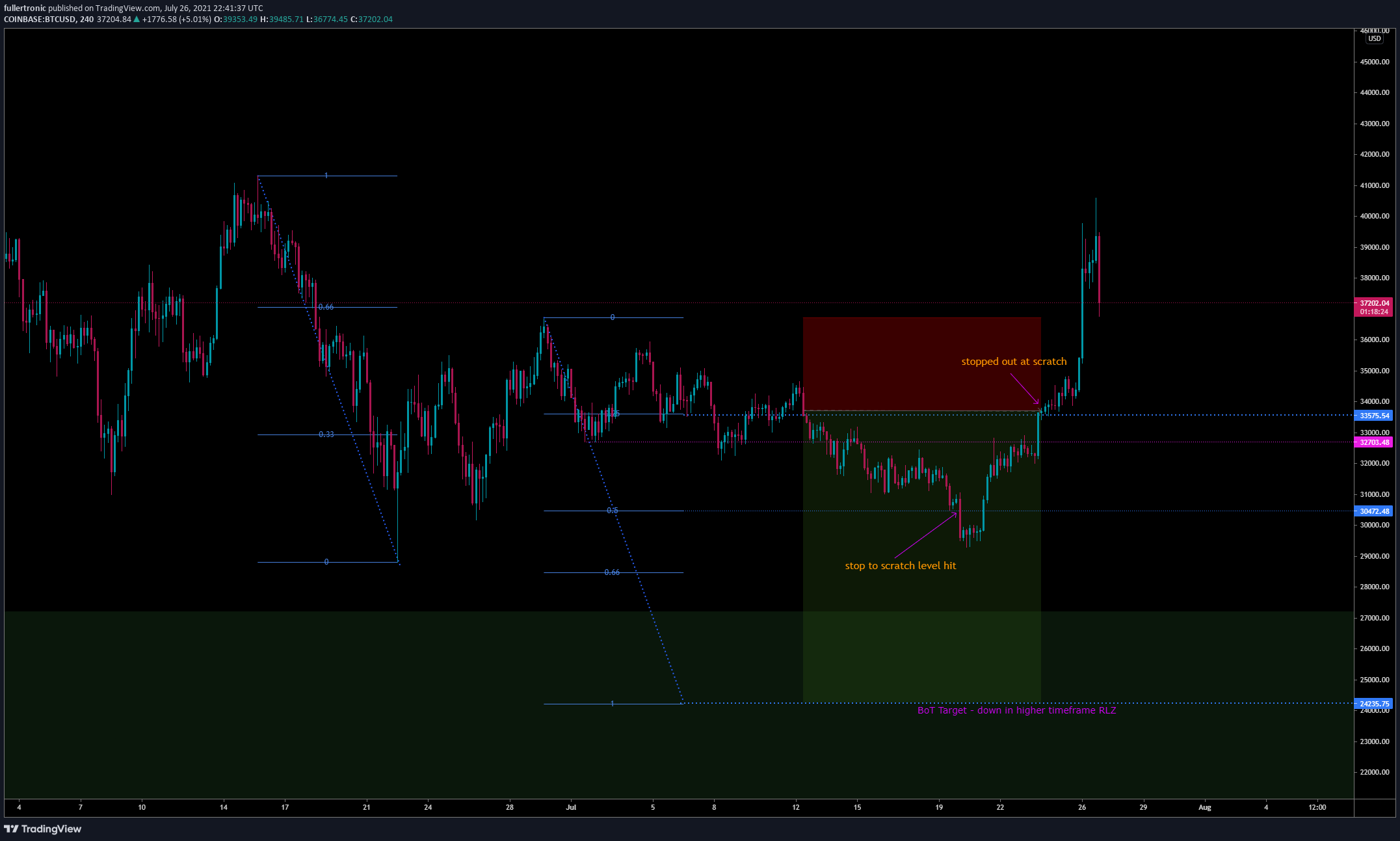 I think I had a pretty good case to make for taking that bearish setup on the 12th. All of my reasons were there and sure enough BTC did sell off pretty hard but it couldn’t get down to my target. Sure I was on the wrong side of the trade this time, but I followed my plan and stayed out of trouble so all in all I’m happy with the outcome. I was able to play from a position of strength and now I’m ready to hop on the next trade as soon as the market gives me my signal. “Next bus in 10 minutes,” as we like to say around the site.

The BoT setup is a trend continuation setup that we teach as part of our Level 1 Course. If you’re interested in learning about it as well as how to build your own trading plan and setups, our new school session will be starting up in September. If you have any questions about the school program, reach out to us at support@therationalinvestor.com or sign up for our 30 day free trial and come on the site and ask us directly.